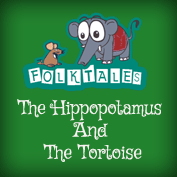 A very long time ago, there was a hippopotamus named Istanim. He was one of the biggest animals on the land just next to the elephant and was thus considered the king. The hippo had seven fat wives and loved all of them very dearly. He often organized lavish feasts for his people. Though all the people of the area knew the hippo, none other than his seven wives knew his real name.

One day, the hippo organised one of his regular feasts. Just when all the guests sat down for the lavish dinner, the hippo said, “Only those of you who can tell my name can enjoy the feast.” Everyone looked at each other’s face and no one knew the name of the hippo. So all of them had to go home leaving the delicious spread and the lovely wine.

Just before they all left, the tortoise asked the hippo, what he would do if the tortoise managed to guess the hippo’s name at the next feast. The hippo replied, “If you can find out my name before the next feast, I would leave the land along with my seven wives and dwell in the water forever.”

The tortoise was aware that every day the hippo and his seven wives went to the river to drink water and wash themselves. The hippo walked first with the seven wives following him. One such day, when the hippo along with his seven wives had gone for a bath in the nearby river, the tortoise made a small hole in the ground and waited for them.

After a while, the tortoise noticed that five of the hippo’s wives had moved ahead along with the hippo, leaving behind two wives. The tortoise quickly came out of his hole and buried himself half into the sand leaving the other half exposed.

While the two wives were walking, the first wife accidentally bumped her feet against the shell of the tortoise. She immediately cried out loud, “Oh Isantim, my dear husband, please come and help me. I have hurt myself.”

The tortoise finally heard the name of the hippo and went home happily.

“Isantim is your name,” the turtle said loudly. All the guests at the feast cheered loudly at the tortoise and sat down to enjoy their meal.

As per the promise,the hippo left with his seven wives after the feast. He went into the nearby river and started living there and never returned to land. Since then, hippos can be seen on the land only at night, while they stay underwater all day long.