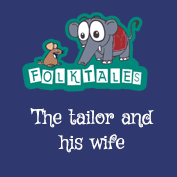 Once, there was a tailor who lived in the city with his wife. One day,when he came back home from the shop, he asked his wife to close the main door. But his wife was angry because he had refused to take her to the mall so she said, “Close it yourself.” The tailor shouted, “No,I won’t.You do it.” They started fighting. After quarreling for a long time, the tailor said to his wife, “Okay, let’s make a pact.Whichever of us speaks first, will have to close the door.” The wife agreed. So, both of them sat there without speaking.

After some time, the wife got bored. She got up and went for a walk. The tailor kept sitting there. Seeing the door open, a street dog came inside the house. It roamed around and ate all the food in the house. The tailor could not shout at the dog because then he would have had to close the door.

After some time, the tailor’s wife returned. When she saw her husband’s head and the mess that the dog had made, she started shouting and crying. Immediately, the tailor jumped up with joy and said, “You spoke first! So you close the door.”